It is with great sadness that we say good-bye to Wal.

He was a valued and respected member of the Healesville Tennis Club for 33 years, having moved with his wife, Teresa, to Healesville in 1988.

Wal passed away peacefully at the Holmwood Aged Care facility on Friday 23rdt April, after a long and frustrating battle with cancer.

When the Blackmars migrated from England, he continued his trade as a toolmaker at the Vulcan factory in Bayswater.  After moving to Healesville, both he and Teresa soon joined us at the Queens Park courts and played in a number of premiership teams in both the Upper Yarra and District Tennis Association and the more recently formed Eastern Region Tennis competition.

In recent years, Wal’s health restricted him to social hits, where he could still hold his own.

Wal was a good all-round sportsperson and was also a handy golfer.  However, his real love was tennis.  He was an excellent teammate whose laid-back, honest approach meant that he never argued with the opposition and was the perfect gentleman, both on and off the court.

We will all greatly miss Wal’s friendly and encouraging nature and extend our heartfelt condolences and support to Teresa.

Healesville Tennis Club will be hosting a morning tea in memory of Wal, when Covid-19 restrictions are lifted. 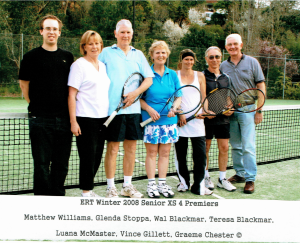 The Victorian Government has bought out a Get Active Kids Sports Voucher Program, which will help get kids back into sport due to the coronavirus.
Eligible children may be able to get $200.00 each to spend on any sport. This can go towards reimbursing memberships, pay for uniforms or sports equipment, etc.
https://www.getactive.vic.gov.au/vouchers/

As of 11:59pm Thursday 17th June, courts will be available but with some restrictions.  Please refer to our HTC Newsletter June 2021 for details.

Note: There is a new QR Code on the gate of Court 3 which must be used for anyone using the courts/venue for more than 15 minutes.

Our tennis has again been disrupted by another lockdown. It's now time to get back on the courts, but with some considerations: As of 11.59pm Thursday 17th June, 2021 •Competitions, tournaments, and training is permitted for all ages. Limited to the minimum number of...
Read More

Tuesday 15th June at 11am.  Queens Park Clubhouse. Bring a plate of food and memories to share.
Read More

It is with great sadness that we say good-bye to Wal. He was a valued and respected member of the Healesville Tennis Club for 33 years, having moved with his wife, Teresa, to Healesville in 1988. Wal passed away peacefully at the Holmwood Aged Care facility on Friday...
Read More

DOT McMASTER For the past 40 years Dot has been observed around Healesville Tennis Club administering mid-week ladies tennis in a quiet manner, supporting women holistically. In this region other clubs have struggled to field teams but at Healesville we maintain a...
Read More

Please note the following before booking a court: