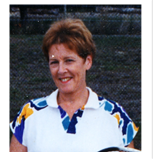 Diana Stuart passed away in August just before her 84th Birthday at New Gisborne, where she lived after leaving Healesville.
Diana was a member of the Healesville Tennis Club for many years and very active in the club: General Committee member, Secretary for 2 years, part of the Centenary Committee, and between 1988 – 1996 was Mid-Week Ladies Representative. She also captained many teams in MWL and played in many premierships. She was well known for her morning tea cakes.
Diana also secured premierships playing Saturday Seniors tennis in both Upper Yarra & District Tennis Association and Eastern Region Tennis.